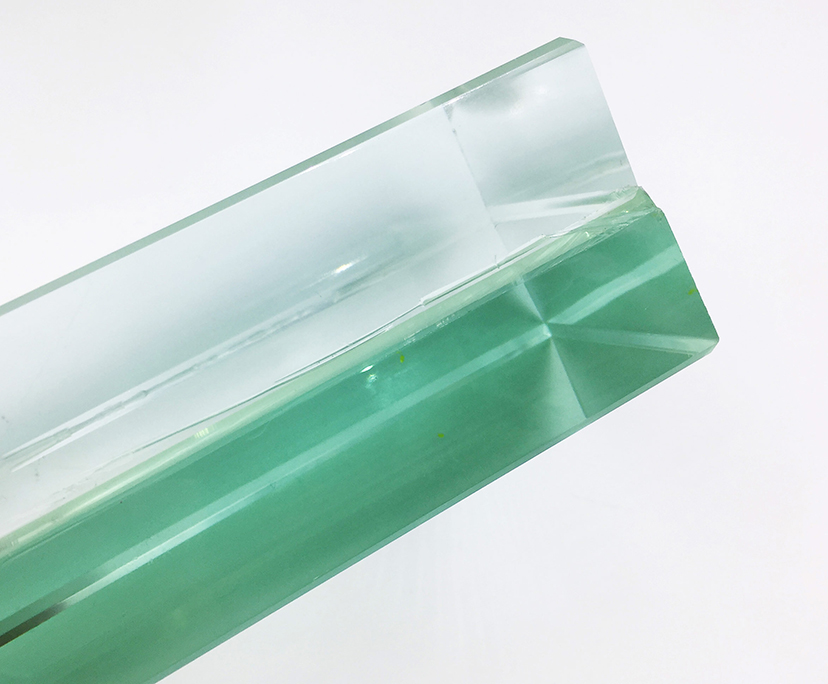 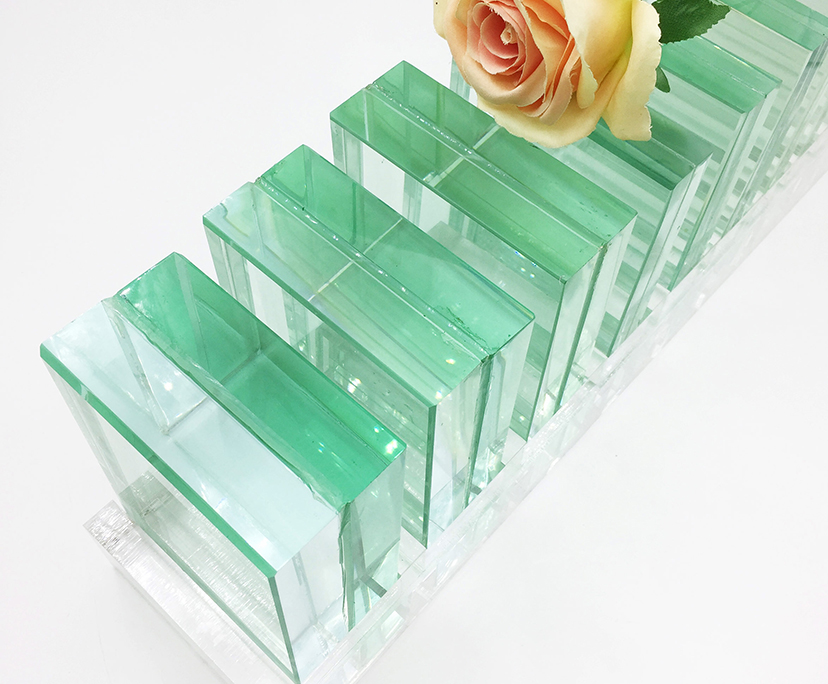 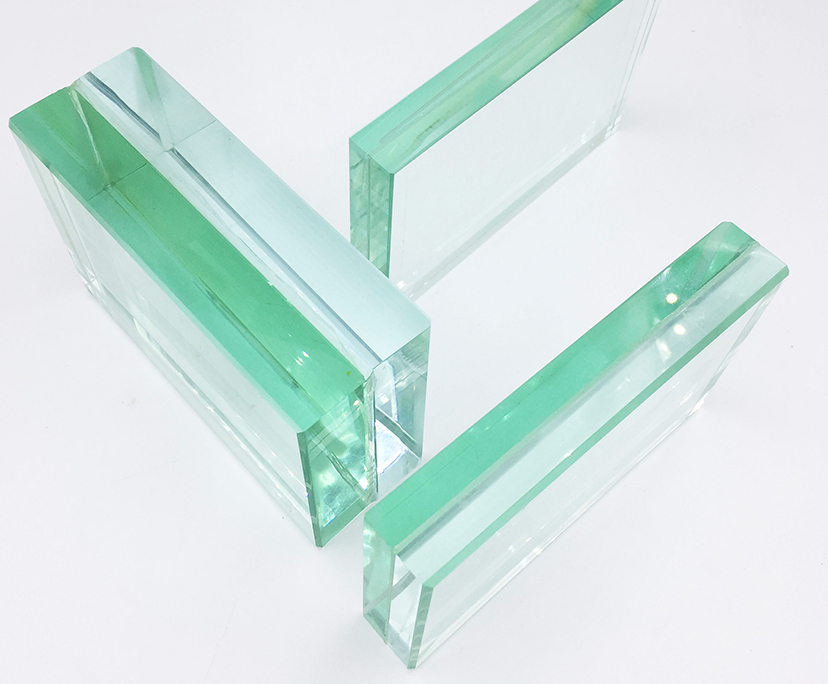 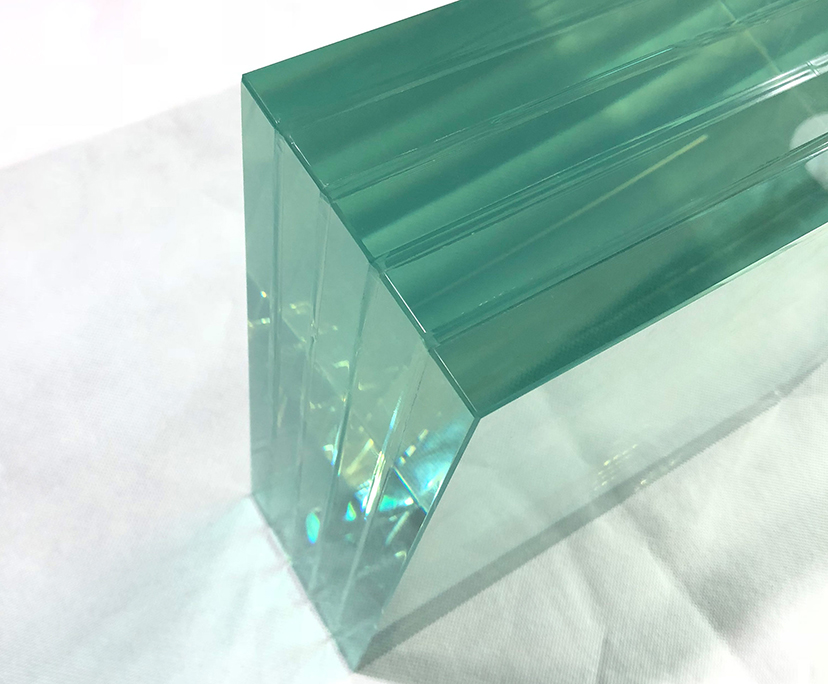 Laminated Glass is made of two or more pieces of glass which one layer or multi-layers of EVA/PVB/SGP with strong cohesion sandwiched under high temperature and pressure between them. The appearance and installation method of laminated glass sandwiched with transparent film are the same with normal glass, but much more durable.

PVB laminated glass is made by PVB sandwich film and tempered float glass.PVB is a kind of polymer material formed from polyvinyl butyral resin and plasticized by plasticizer 3GO (triethylene glycol diisooctanoate). The thickness of PVB glass interlayer film is generally 0.38mm and 0.76mm. It has good adhesion to inorganic glass and is characterized by transparency, heat resistance, cold resistance, moisture resistance, and high mechanical strength. PVB film is mainly used for laminated glass. It is a PVB film with polyvinyl butyral as the main component sandwiched between two glasses. PVB laminated glass is widely used in construction, automotive and other industries due to its many functions such as safety, heat preservation, noise control, and isolation of ultraviolet rays.

EVA/PVB/SGP can effectively prevent sound waves, Sound waves can be obviously weakened when it goes through the laminated glass so that noise disturbance in the office or living environment is reduced.

Laminated glass can effectively prevent UV(more than 99% of UV) which can protect the valuable furniture, exhibit, and artwork, etc. from discoloring caused by UV.

Due to its unique features. Laminated glass can be extensively used in building skylight, elevated floor, high-grade curtain wall and window, furniture, showcase, and aquarium, etc.

EVA is short for the Ethylene-Vinyl Acetate Copolymer, with water resistance, corrosion resistance. When the EVA film used in laminated glass, EVA melt temperature is low and fluidity is better relative to PVB or SGP. The difference in ordinary transmission and high transmission, Suitable for laminated something like folder roll, cloth, metal mess between the film. And can be made into patterns, materials, rich decorative glass. EVA is good for water resistance, but for the UV resistance is normal, when exposed under sunshine will prone to yellow aging. At present, EVA laminated glass is mainly used for indoor partition, shower room, etc. Generally for interior decoration.

PVB is also called as Polyvinyl Butyral, which is currently the most widely used interlayer material for architectural glass and automotive glass. PVB laminated glass has good safety, sound insulation and resistance to ultraviolet light, But PVB is not good for water resistance, a long term wet soak easy to delaminating. It has high transparency, good for cold resistance, impact resistance, and UV radiation resistance.

The PVB laminated glass can prevent penetration when the glass is broken by the outside impact because the layer can absorb the impact energy. Only produce crush cracks like spiderwebs, the glass debris firmly adhered to the middle layer, so it will not fall off and scattered, can continue to use and buy the time for a replacement.

2. PVB laminated glass is very tough, even when the thieves break the glass, the glass will firmly together to keep the integrity because of the middle layer.

Because of the damping function of the acoustic wave, PVB laminated glass can effectively reduce the spread of noise, especially in the airport, train station, downtown, and road on both sides of the building. The sound insulation of our laminated glass is obvious.

PVB film in the laminated glass can absorb more than 99% of the UV radiation, which can protect the indoor furniture, plastic products, textiles, carpets, artwork, ancient artifacts, or goods from UV radiation. Can obviously avoid the fading and aging of those things.

We can provide all kinds of color PVB according to the RAL code.

SGP Laminated Glass also called Sentry Glass Plus, which is one kind of high-performance laminated materials developed by Dupont, Kuraray at the end of 2014 acquired.

The SGP folder film tear strength is 5 times more than the PVB folder film. Even when the SGP laminated glass is broken, the SGP film can also stick the broken glass breakage after the formation of a temporary structure, the bending deformation is small, but also can withstand a certain amount of load and not the whole piece of fall.

SGP film has good edge stability, it's not sensitive to moisture. SGP folder film has colorless translucent and good weather resistance performance, not yellowing, The coefficient of SGP film is less than 1.5, while the PVB yellowing coefficient is 6-12, so it's better when used for ultra-clear laminated glass.

2. Floor, glass corridor, SGP laminated glass can withstand greater pressure and can meet the needs of transparent observation, can be used as submarine windows, deep water peep mirror, watch aquarium, and so on.

If you want to know more information about BTG glass company, feel free to click the link as below: